For Christmas this year I was the lucky recipient of a Bowtech Flatliner Archery Package. It was something I’d been just throwing on the list for years without ever really caring if I got one or not… Well… I am kicking myself in the ass that I didn’t get into years ago!

After practicing, practing and practicing for the last few months I am fairly confident that I can take a killing shot within 20 yards. Being on the Island, Black Bear seems like a logical first choice.

I’ve got a trail cam setup on a trail I picked up a few bears last year on and have been scouting most of April but haven’t seen a thing until last night.

Coming around the corner on the logging road behind my house I saw a large black object clearly out of place in a large, dead douglas fir tree. It was a black bear cub. He dropped out right away and met up another cub. I hopped off the bike a little leary as I had not located the sow yet. She was right there at the base of the tree just out of sight.

When I focused the camera in for a pic I realized there was actually 3 cubs! Good for her. 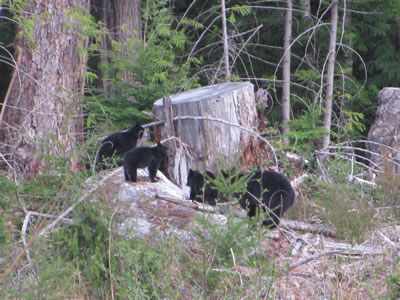