I was dropping off a nice whitetail that I harvest for a shoulder mount and happened to see a husky 3/4 mount black bear hanging out of the wall. The sheer size and shape of the bear was so impressive, I found myself forgetting all about the whitetail I had just dropped off and all I could think about was getting a nice big bear! Just like the one on the wall at my taxidermists. A trophy sized mature male black bear and I wouldn’t settle for anything less.

The problem… This was November and I wanted to take a spring bear. I was in for a bit of a wait. It wasn’t a bad thing though as I was missing one of the most important parts of getting a Black Bear on the Island. Wheels! I had no vehicle other then my 1975 Jeep CJ-5 and well let’s face it… It’s not something you want to be 250km back in the bush with . It would rattle itself to pieces on the gravel roads. So the first thing I had to do was get myself a truck. I didn’t want to depend on ANYBODY but myself for my outdoor pursuits.

So this year thanks to my online ventures I was finally able to purchase myself a truck. I bought a 2003 Ford F150 Lariat 4×4. The perfect truck for all my hunting exploits. And the perfect truck to get me out there in search of a big bruin. Opening day for spring bear was just around the corner after buying my truck and I had rounded up a good friend and his younger brother to go out and see if we could find an early rising bear.

The opening weekend of April 1st found us barreling down the Island Highway on our way into the area south of Bamfield. Klanawa to be exact. I had been there on several fishing trips with my friends and had the opportunity to do a little scouting and had decided this would be the area we would pound hard. This would be the area that would produce my trophy Island Black Bear. 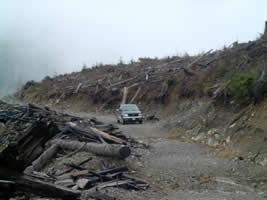 The first weekend it rained really hard, we did manage to see two bears though and we also got plenty of prelimary scouting in discovering where all the spur roads went and where we thought held the most potential based on the habitat and sign. We went home empty handed that weekend but still had a great time and learned plenty about the area we had just started to hunt.

Actually… I went home empty handed 4 weekends in a row. We saw nearly 30 bears over the course and I even had several very good opportunities to harvest some average Island Bears in the 5 ft class many of which I have on video. I was holding out for a 6 foot mature male and although we had seen a few, they were just glimpses and we didn’t have time to setup let alone shoot on any of them.

As a first time bear hunter I found it extremely difficult to judge the size of the black bears. I insisted on getting as close as possible to every bear we spotted so I could examine them and watch how they behaved and see their mass and everything about them. I wanted to know black bears inside and out so there would be no mistake when that I spotted the big bruin.

It was getting through mid-may and I had to go to a wedding in Creston. I came home on the Thursday and over a beer at a BBQ friday night I had recruited another friend to go out on the Sunday morning and come back monday of may long weekend. I was excited. It was getting late in the spring bear season and I really wanted that 6ft bear!

Sunday morning came and off we went again into the Klanawa river area. On the way through cowichan we saw 4 or 5 deer out on the road and it looked like the game was moving around. We hoped anyways. We spent most of the day glassing, and driving, and glassing, and driving… You know the drill. It seemed like we had been at it for hours without even the slightest look at a bear. 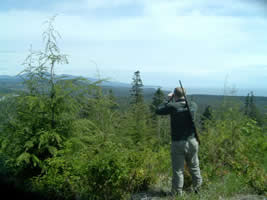 The sign was everywhere but no bears! that is until the clock stuck about 4pm and look out… The bears were coming out of the woodworks. It seemed like every corner we rounded there was another bear running off the road. We had spotted a potential shooter and were racing to get under the bear on a clearcut and as we’re going down the spur another bear runs right across the road in front of us and gone. It was crazy…

In the next 2 hours I would spot and stalk 3 different bears within shooting distance only to have the bears get into to deep of brush or get themselves into positions where I couldn’t make a good shot. I was starting to feel that the end of the day was coming near and I would again be going home without a bear.

As we were leaving the last clearcut we decided to make a left hand turn and check out some new area we had only glanced at before. It was only 2 minutes away and since it was about 7:45pm it was going to be our last play of the day. So what the hell… away we went.

We pulled into this massive clearcut with a few forked roads and clearcut brush patches in between the roads. We started and glassing and I hear my buddy Ben yell, “Holy Shit” there goes a big bear across the road headed left… Now my buddy Ben isn’t a hunter and I sort of doubted the fact he’d seen a “Big” bear so I laughed and said “sure Ben” “NO REALLY, He was BIG” and I could tell the way he said it he was serious. I noted where the bear went into the timber and it was only 400 or 500 yards through and he would be into a clearcut patch again right adjacent to the road, so I sped up and around to where we thought he might come out.

Low and behold there was a bear already there! And it’s eyes and ears were glued to the bushes where the big bruin was coming through. I said to Ben “This is it…!” “That bear is going to come out right here any minute, we need to get into position” The wind was in our favor and not even 10 yards away from us was a pile of logs, so I scrambled up the pile and used the top log for a rest and to cover us from the bears view. Ben got the camera setup and no sooner that bear came right out where I thought he would.

That bear came out and swaggered down a little and you could just see that he was packing some weight in the front shoulders, and his ears were small and he just looked like he was a bear who’d been around the block. In fact this was HIS block.

We stayed quite and watched the bear go about his business while I field judged him. It was when he stood up on his hind legs to scratch that I realized he was a really good sized bear and that I was going to take him. I loaded a shell in the chamber and he heard me! “Shit” I thought to myself, he’s going to bugger off on me, so I stayed absolutely still, just staring at his face through the scope… Waiting… Waiting for him to turn broadside so I could take the shot.

He turned, and started to head back to the tree, I thought he was going to scratch again but he didn’t he went right broadside and as he started to turn again towards me I touched off a Federal 175grn softpoint with my 7MM Rem Mag and it struck the bear right behind the front shoulder cleanly and quickly tipping that bear over and we got the whole thing on video… I had done it! I had my Island Bear. And a good one too!

We waited a few minutes and then went to go and recover the bruin. He was right there not 5ft from where I had hit him. We thought we could be heros and drag him out of there for pictures well it took more then 15 minutes just to position him for the pictures. He was HEAVY. Probably around the 400 pound mark. The bear measured out at 6′ 3″ from nose to tail. 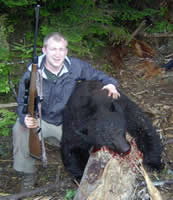 It took us a while to skin him out and quarter him up being my first bear and I wanted to do an excellent job for my taxidermist. We didn’t make it back to camp until about 10:30pm and we ate a quick campfire dinner of lobster and corn and then hopped in the truck and went to sleep.

First thing in the morning we headed for home… And my bear hunting had come to an end just as fast as it all started.