Although this year wasn’t the year I would take my Trophy Stone Ram it was still full of memories and an awesome hunt to reflect on.  We left Sidney BC on a ferry bound for Vancouver on July 25th. The plan was to arrive ultra early so we could get some scouting in on the area we were going to be hunting. The drive up north went fairly uneventful aside from a 1/2 curl bighorn ram we spotted in a farmers field along the highway. We watched him for a few minutes and I took a short video clip of him. 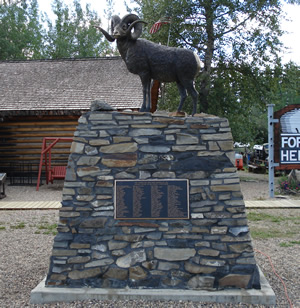 We arrived in Fort St. John on the 26th of July and after getting all of our gear together and packing up the quad & trailer we spent the night trying to shave a few measly ounces off each of our packs. We were on the road by 7:30 the next morning. We saw plenty of wildlife on the drive up and arrived at the location where our hunt would begin early that evening. We spent an hour getting our camp setup and then headed off to start glassing for sheep.

It wasn’t even 6pm the first night and we were already looking at a small group of rams 4 or 5 in total we were quite a ways away and we could tell there wasn’t a shooter in the bunch. None the less we were seeing sheep and the season wasn’t even open for a few more days.  After a nice comfortable nights sleep in the toasty warm “Eena” tent we were out of bed around 5am had an early breakfast and scurried off to start glassing again. 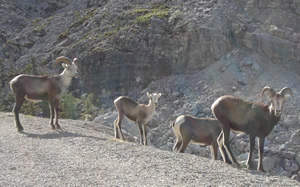 My dad is an old sheep guide with a set of unbelievable eyes, if sheep are on the mountain he’s going to find them and it wasn’t long until we started seeing sheep again. This time we were looking across a thick timbered valley at a small group of 4 rams that quickly turned into 5 rams, then 6 rams, no 7 rams, before we knew it 18 rams had come together in this group and were feeding somewhat scattered across a high grassy hillside. We watched these sheep carefully through the spotting scopes for over an hour and determined that 2 or 3 of the sheep were definitely legal full curl rams but not big enough to make anyone drool yet. Besides we still had yet 3 more days until opening day. 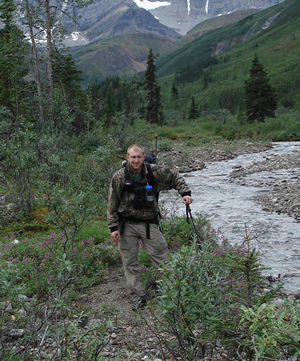 The plan to hike into our spot on the 29th went perfectly to plan and the weather cooperated with an extremely nice and sunny day for the hike in. It’s no easy hike with multiple washes to traverse, willows 15 feet high and some really steep country where you have multiple sections of lengthy side hilling to work through. I’ll admit it’s a tough hike with a fully loaded pack on!

The days before the opener we would spend picking apart the surrounding mountains with our optics. The mountains in this area are comprised of high grassy ledges, with big sweeping bowls and alpine meadows set amongst the rough black shale cliffs. There was plenty of timber and buck brush down lower to make some really wicked ram country. This particular spot we were hunting at my family has hunted for decades and there have been some real dandy rams fall in this small patch of hunting ground.  We spotted 6 ewes and lambs that night and also observed plenty of locations on the mountains where there was sheep activity but the rams had so far managed to elude us in here.

The day before opening it started raining at about 11am and wouldn’t let up for the entire day… After chasing a porcupine out of camp when we returned from glassing in the partially fogged in valleys we proceeded to cook our Mountain House freeze dried meals for dinner. I ate Pasta Primavera on this particular night and it went down really well compared to the meal I had the night before. The pasta actually tasted great and set me up for a good nights sleep. We went to bed that night in our little two man tent
with high hopes for the next day. The weather so far was no longer cooperating and we were hoping for a break.

As many of you know weather in the mountains can change rapidly and I awoke several times during the night to the pounding of the rain on the sil-tarp covering our tent (another great gear investment Sil-Tarp II). The weather had no intentions of going along with our plan. I awoke in the morning and it was still raining and so cold I figured there would be snow on the ground. I wasn’t too far off. The mountains were almost completely fogged in aside from the snowy peaks we could see through the clouds… Not even 1000 feet above us and there was probably 6 inches to a foot of fresh snow. 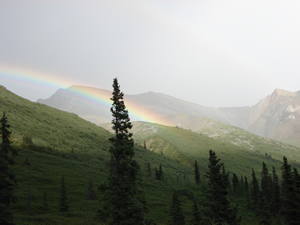 Glassing was impossible as the fog was rolling down really low and we couldn’t see anything. This lasted nearly the whole day with some brief patches to get glassing in. We waited out the rain for another day and when it had not let up in nearly 3 days we decided it was time for us to head out and try our luck in another area we had planned to hunt.

The hike out took most of the day and was raining the entire time. Good rain gear is a must when hunting for sheep in August!

We arrived back at our base camp in the evening and had a great steak dinner before retiring to bed. I awoke at 5am the next morning to my dad firing up the wood stove and heating up the tent… That makes it a whole lot easier getting out of bed to start looking for sheep again. While my hunting partner and I were in the mountains my dad was able to get some more scouting in and found several more small bunches of rams. He had spotted a few legal ones in the bands he had found but we would need a closer look to know what they were for sure. Upon returning to these locations the rams were nowhere to be seen.  In fact sheep were nowhere to be seen. It was now into the season and it was obvious there was a lot of hunting pressure in the area. The sheep had started to really move around. 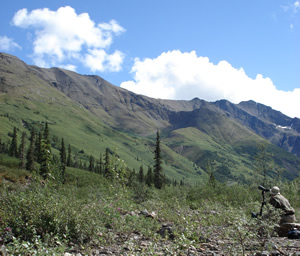 The real clincher happened when we had spotted 3 beauty rams in a very unlikely place. The lead ram was a really heavy, dark colored ram that my dad figured would go 40+” and the second ram was real light horned and light colored and figured it would go 38-39″. After looking at plenty of
rams through the spotting scopes these were definitely the most impressive we had seen so far. The decision was made to pack up our camp at it’s current location and make a move closer to where these rams had been spotted and then hike in and have a go at them. It was still going to be a 2 mile hike just
to get to the mountain they were on and then it would be a long haul to even get to the rams. They were in a really sketchy spot.

The camp was packed up and everything ready to move within an hour and we were on our way to the new spot. My dad had arrived there ahead of me and was watching through the scope when we got to him.  He wanted to get a bead on the rams before we finalized the plans. When I finally caught up to my dad he looked over at me and said… So, You want the good news or the bad news?”…. I knew what he meant right away but let him finish, “Gimme the good news” I said… “Well” my dad replied… “The good news is your ram is still there… The bad news is there are two hunters already skinning him!” That sucked!  But I have to tell you I was a little relieved of not having to make the trek to get to him anymore. All of the hiking was beginning to take a toll on my feet.

The last few days of the hunt were a little more relaxed and we spent a few days scouting and just enjoying the scenery. We met two great guys from the Kootenays that were up there hunting also and shared a couple of campfires with them and had an all around really great time. The quest for my ram will continue next year.