Every year during November I head back to my home town of Fort St. John for a little deer hunting. This is where I took my first big game animal. It was a dinky little 4 point muley buck that I took 10 or 11 years ago.

On the 2nd day of hunting we were doing our usual rounds of the deer patch. We were looking for fresh sign and noticed some rubs that were hit during the night as well as tracks going every which way. We were glassing the rolling hills of the lightly snow covered alfalfa and spotted several does and a few small bucks. We watched them for a bit watched what they did and then started to move on.

We started up a long steep hill that is just like a corridor leading from one alfalfa field into another. There were rubs running up both sides every 20 feet or so. It was obvious the bucks work this track pretty heavy in the rut. As we started to near the crest of the hill it quickly opens back up into rolling fields on the right hand side and in one the dips only 30 yards away we noticed horns… 2 Sets… It’s two Muley bucks and they are fighting. 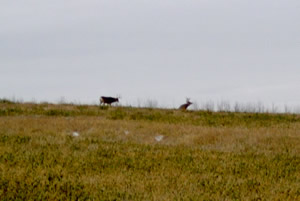 These deer were in a fierce battle totally oblivious to our presence less then 40 yards away. They were both decent 150-160 class mule deer but neither buck was really what I was holding out for so I elected to pass the opportunity at one of these bucks onto our hunting partner. He happily agreed and we watched them for a minute to decide on which was the bigger buck.

By this time they were 100 or so yards away and still fighting broadside to us. It was the perfect shot opportunity. We told our partner to setup and nail the buck on the right we no sooner said that and *BOOM* the 30-06 dropped the buck in his tracks you can see him going down in this picture. 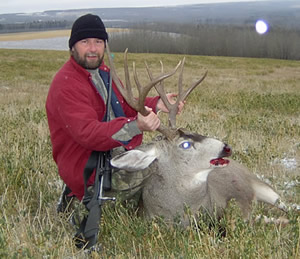 Even though the mule deer buck was down and obviously not fighting anymore the other buck was still hanging around within 20 yards of us walking around in circles. It was crazy. I had a tag and he was legal but we already had one deer to get gutted and hung before lunch and he just wasn’t big enough. We hung the muley up in some trees and then headed off for lunch.

Now that we had a muley down I joked that now it was time to hunt for my big whitetail. We left our deer patch and had one field left to check. We almost never even looked into it until my dad said you wouldn’t be much of a hunter if you didn’t…

I laughed and we checked the field… Sure as shit if there isn’t 4 or 5 whitetail does out in the field and standing around with them in the middle of the afternoon is an amazing 5×5 typical whitetail buck! This was exactly what I was after so much the dismay of my hunting partner I didn’t pass this one up!

The deer were about 400 yards or so away but they were in the middle of the alfalfa field and starting to move away. I didn’t have time to make to hit the bush and flank the deer out of sight so I had to make the stalk in the
open. This field had some very slight rolls to it so the decision was made for me to go straight at the buck in one of the these little dips. 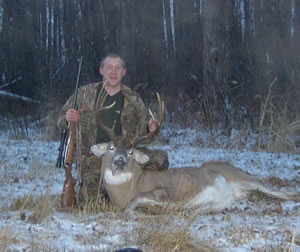 I got my rifle ready and started off on my stalk… I was crouched down, as low as I could go taking quick little steps… I made it 50 yards into the field and the buck looked right up at me. I froze… Shit… I am busted I thought to myself…

I remained calm and still frozen solid. It felt like 5 minutes but the buck eventually put his head down and I went back to my quick little steps trying to get to a good shooting position. This cycle repeated a few times with the buck looking up at me, me freezing and then he’d get back to eating again.

As I came into the last dip I was now within 200 yards of the buck and couldn’t advance anymore. As I crawled to the shallow little crest of this dip I removed my Ronyn Fleece Camo jacket and rolled it up into a rest… Slowly laid down and put a shell in the chamber… I immediately found the buck in my scope. 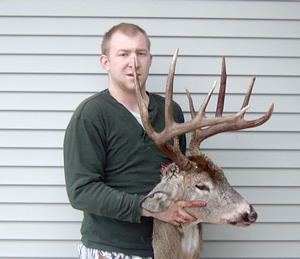 He was facing left and broadside about 200 yards away with his head down eating
alfalfa he had a doe right behind him so I had to wait a minute or two until she cleared out the way. I held just behind his shoulder and let one fly out the barrel of my 7MM. The buck was hit incredibly hard and must have
jumped 8 feet in the air as he sped off like a rocket. He made it about 150 yards to the edge of the field and collapsed.

Not too bad for the second day and the conclusion of my 2005 whitetail hunt.