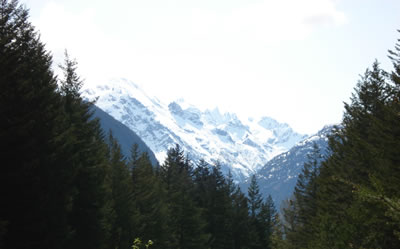 We had a few local connections, that provided us a pile of great information and we decided to head up to Bella Coola on the 8th of May.  The highway from Vancouver up to Williams Lake and then into Anahim lake was great,  It's just a short ways passed Anahim lake you'll run into the legendary "Hill" that the residents simply refer to as "The Hill" and nasty, twisty, steep hill it is too with a near 19% grade and absolutely no guard rails.  It would be fun to a tow boat down, make sure you have good brakes, and enough power and efficient cooling to make it back up.

My dad has a friend that lives in Bella Coola and was kind enough to loan us his boat which was an 18 foot aluminum.  It handled the local waters great.  We weren't too worried about having a boat to sleep in as we had arranged accommodations at a local resort that is current under construction at the Nascall Bay Hotsprings.

The ride from Bella Coola to Nascall Bay was about 1.5 hours in our boat, and the roughest part was coming around the mesachie nose and into Laboucher Channel.  Once inside Laboucher it was near dead calm, and calm as well through dean channel and right into Nascall Bay where we were Greeted by Frank (lodge owner) and his crew of happy helpers. 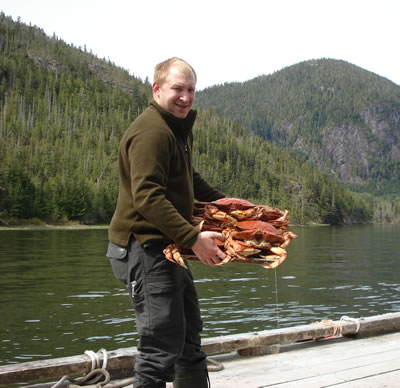 The lodge is outfitted with a complete dock and gas facilities, restaurant, cozy cabins, hotsprings, and even wireless satellite Internet.  The Tap Water comes straight out of the mountain springs, and is gravity fed down to the lodge and I must say it's some of the best tasting water I've ever had.

After we arrived and got settled into our room we decided to head out in the boat and do some fishing so we could catch some bait for our crab traps.  After a few minutes we had a couple of cod that we wired into our traps and dropped them in a little spot called Eucott Bay, just a little ways southwest of the lodge.  This was recommended to us by several different locals and proved to be productive.  We each took home our limit of 12 crabs over the few days our traps were down and these crabs were big, we caught so many that I only selected the finest crabs, with all 8 legs and 2 pinchers throwing everything else back.

While the seafood was great it wasn't the only purpose we were there… Our real goal was to fill a Grizzly bear tag.  And the fishing and crabbing was mainly just a filler during the middle of the day, when the bears are all snoozing like most every other critter.  Once 2 O'clock hit we were at the flats and just still hunted until dark.  2 nights went by without seeing a thing aside from some seals and the odd porpoise or two…

On the third evening we were sitting in the bay, watching the flats and I decided to crack the new Zeiss Diascope 85m Spotting Scope out and see if I couldn't find some goats… Several hours had gone by without any action so I wanted to pass the time… I started glassing the mountainside across from us in Dean Channel and quickly spotted 3 goats feeding on the edge of a small waterfall… It would have made a nice picture if I weren't close to 2 miles away.  I continued watching the goats until I heard my partner mumble… "I am not sure if this is a black or a grizz…" I quickly turned around and saw a big dark colored mass coming out of the heavy rainforest and onto a small section of tidal flat…  My partner didn't have his binos handy right away so I threw mine up and knew instantly it was a Grizz… 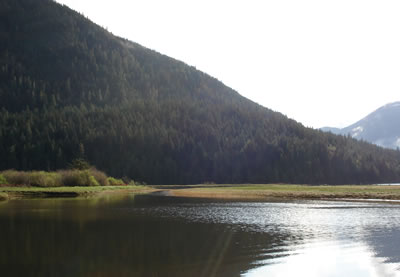 It turned out the bear was about a 7 – 7 1/2 foot boar and he did have a really nice coat on him,  His back was a lighter blond color while his arms, and legs were a very dark brown.  The bear had been in a few tussles as he had a big scar across his forhead.  We hummed and hawwed at the bear for close to 1/2 an hour and then decided we'd hold out for a bigger bear…  You know how it goes sometimes, and we never did see another bear the whole trip!