After hiking out of the mountains ramless we loaded up our gear and headed back south for the long drive to Fort St. John. We arrived late afternoon, and after discussing it with my dad decided we’d better go pick up some tags and try to get a bull in the 3pnt or better season on private land.

We stopped by the landowners house on the way out and got permission, She told me a party had just left the day before with 2 six point bulls and that another party was due to show up tomorrow, Since I was only hunting for the one evening (we had to drive back to the Island the next day) She gave us permission to go giver a try.

The area we had permission on ecompasses 9 sections of private land sowed in alfalfa and clover along with several hundred acres of standing timber. Right alongside a major watershed as well, so it’s right on a travel corridor.

We headed out there about 5pm and on the 45 minute drive to get there I was a little dejected at the pressure the area had received and was skeptical if we’d come across a legal bull on our micro hunt.

We got to the lower field where it was decided that one of us would sit in the lower field (where the elk commonly feed) and the others would head up to the other fields so we could cover more ground. Fine, I volunteered, got out of the truck and began the slow walk through the spruce timber toward the opening of the alfalfa field.

This a big alfalfa field a few hundred acres in size, but bordering alongside is a creek running through a shallow and wide ravine that the elk, moose and deer seem to travel along frequently. Along the edge of the field on the corner we walk in from is a small ditch just enough for a guy to sit down in without too much worry of being spotted.

I snuck my way into the ditch alongside the field, and got into position… Slowly raised up the swaro’s hanging around my neck and scanned the field from my left to my right… Nothing… Nothing… Woah!!! In the closest corner of the field (the one I looked in last) was a 6 point Bull… About 200 yards away staring right at me. SHIT I thought… I am totally busted… I didn’t dare move but I could see out of the corner of my eye 2 cows not too far off to his right that were now in the frame as well. It took him about a minute to settle down and he went back to feeding, the moment he put his down I flew out of the ditch and into the timber as fast and silently as I could and then jacked a shell into the chamber. I snuck about 15 yards into the timber and then just slowly closed the distance between me and the bull while hidden behind the trees.

He must have sensed me because at about 75 yards he put his head up again and was looking in my direction. I was standing in between two spruce trees, barely exposed. It was a perfect broadside shot but there was nothing to rest on without getting busted for moving, so I raised the .270 and brought the crosshairs onto his rump and slowly crept along his body until I had him pegged, BOOM… He fell down hard right away, then got back up and hobbled over to the edge of the field and dissapeared. I radioed my Dad and told him to bring the truck back because our Elk hunt was now over… He didn’t believe me at first!

I waited until they got to me with the truck which was about 10 minutes and then went looking for my Bull. We found about 100 yards from where I’d hit him. He just made it to the edge of the field and collapsed in the low lying timber and brush along the edge.

My .270 was loaded for sheep shooting a Federal Vitalshock 130 grain so I might have been a little undergunned but it worked out well.

Start to finish my first 6 point bull took me about 10 minutes of Elk hunting! 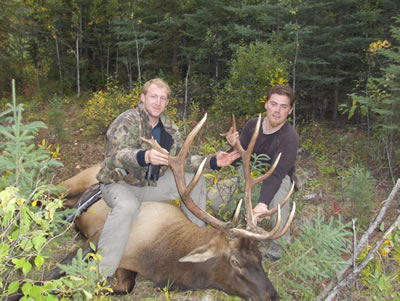