A Great Down Sleeping Bag For Sheep And Mountain Hunting 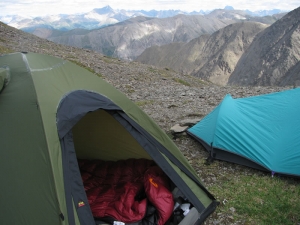 After spending too many cold and uncomfortable nights in my old Sierra Designs synthetic sleeping bag, it was clear that I needed to expand my horizons with regards to the new sleeping bags that are on the market now.  Down Sleeping Bags have come a long way and now thanks to superior light weight shell fabrics and waterproofing treatments, down bags essentially perform just as well (if not better) than synthetic bags in the wet, cold and rainy weather one experiences in the sheep mountains of BC. If I wanted a more comfortable sleep, with a lighter, warmer sleeping bag, it’s about time I made the switch to a down bag.

My old 3 season bag (Sierra Designs “shackleton”) was rated for -7c and weighed 4lbs 10oz, that is a ridiculously heavy sleeping bag for backpack hunting, and while it was comfy for any early hunts, it was definitely not warm on some of those nights when the temps would drop below freezing.  My requirements for a new down sleeping bag were as follows.

#1.  Must weigh around 2lbs (cutting my sleeping bag weight in HALF)
#2.  Must have some type of water repellent shell fabric.
#3.  Must be warm enough for all 3 seasons (in the BC mountains).

There are several bags on the market that meet these criteria, but it was through one of the hunting forums I belong to, that I was introduced to a little known, but innovative company, in Belcaire, France that was manufacturing a versatile, lightweight down sleeping bag called the “Bloody Mary”.  What makes the bloody mary so versatile?  It’s a uniquely designed removable collar system within the sleeping bag, that allows the user to attach 2 different collars depending on the type of conditions you are expecting.  Most sleeping bags have the collar already stitched into the bag, and it maybe a full collar, 1/2 collar, or just a little flap to slow the heat from escaping the inside of your bag, the point is, that’s not versatile… The Bloody Mary can be altered, (easily in the field) to help keep you warmer and more comfortable.  Honestly, if you’d like to all know all the features of this bag, ANY retailer that sells it, provides a thorough description as well as on the Valandre website.  You came here, because you want to know what I think of the bag, so let’s get on with it…

After some more research (Hunting Forums, Backpacker Reviews etc..) I decided to go ahead and purchase a Bloody Mary for my upcoming backpack sheep hunt.  I ordered the sleeping bag online from High Calibre Gear (A hunter friendly retailer) in a size Medium, Left Zip ($478.95 + Shipping), “Carl” was the person I spoke with when ordering and he’s an Elk hunter in Montana and loves to talk huntin’, tell him the BCHuntingBlog sent you.

The sleeping bag arrived about 6 business days later and I pulled it out for inspection.

Here Are My Initial Thoughts: 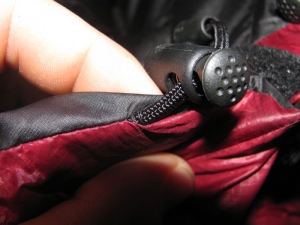 The bag came shipped inside a box, and inside the mesh storage sack, attached to the sleeping bag was the stuff sack, and the down collars were stored inside the bag, 1 attached to the sleeping bag already, and another stored in it’s internal pocket.  I’ll have to admit, I was a little dissapointed upon further inspection to find that there was already some down leaking from the “marie-anntoinette” collar and there was also some stitching that was already failing(SEE COMMENTS BELOW – Niels, the Owner of Valandre has addressed my concerns), where the drawstrings come out of the hood/collar there is no channel, grommet or heavier stiching in place to isolate the drawstrings.  As you pull them, it’s pulling apart the stitching for the hood, you can see what I mean in the picture.  With only a 9 day trip under it’s belt, after 9 years the hood will be coming apart, hopefully that’s not the case, you don’t want to see problems like this on a $500 sleeping bag.

The outer shell fabric felt quite thin, and I was initially worried about it’s durability, “was I going to have to baby this thing…?” went through my mind. 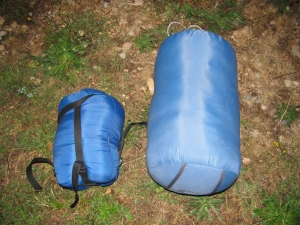 The bag itself, was extremely light at only 2lbs 6oz and I couldn’t believe it compacts so small with the provided stuff sack, you can see in the picture the difference between my Bloody Mary and my old synthetic bag.  It helped me free up a ton of space in my pack, and cut down on the weight by over 2lbs, that was an impressive upgrade in the weight reduction department and I was very happy with that.

Crawling into the bag on my living room floor, I initially wondered if maybe I should have went with the large sized bag, but I fit into the medium with my legs stretched out and a little room to move (what do you expect with a lightweight mummy bag?) I am 5’10” and about 200lbs, so if you were any bigger than me, it’s the large you’d want for sure.

So How Did The Bag Perform?

Just like all my gear, I threw the sleeping bag in my pack and headed out on a journey 18+ miles off the Alaska highway, and up into a little drainage in the Rocky Mountain Trench my family has hunted for decades.  In total I spent 9 nights in the Bloody Mary this year at varrying altitudes and weather conditions, from driving wind/rain (and I mean HARD) to freezing temperatures, and in the extreme heat, as usual it was August in the BC mountains, you get all 4 seasons, sometimes in just one day!

The first few nights, the temperatures were above freezing, but still pretty damn cold when you’re 6500′ feet up in the Rockies hidden away, on a wind blown ridge and I stayed comfortable and warm in the Bloody Mary, there were no cold spots in the bag at all and no problems with sweating, or poor ventilation (I had the foot vent zipper open about 6″).  Sleeping on the Exped Downmat 7, in combination with this bag, was actually quite comfortable, the Exped is really the cat’s a$$ but that’s for another review.  There were a few occasions in the middle of the night, where I had been tossing and turning (forgot my earplugs and the wind was CRAZY) and woke up in a bit of a panic, because the bag was tight around me, I’d left my pants inside the bag to keep warm, and in my tossing/turning state I had wrapped myself up in those, and twisted the sleeping bag and it was a shit show to say the least.

The bag is definitely tight fitting (I possibly should have went with the large size), but that’s a price you pay for such a lightweight and efficient piece of gear.  It’s designed to keep you warm and alive in some pretty gnarly conditions, accept that and you’ll be okay. 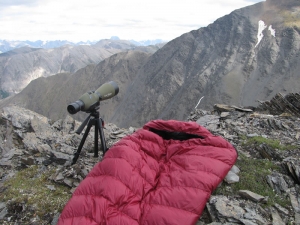 One of the features of the bag that I was initially sceptical about was the durability of the outer shell fabric, and after stuffing it in, and ripping it out of the tiny little stuff sack, over and over as we moved camps it proved to be quite durable, there was no issue.  We went through a couple rainstorms up high and one night in particular there was a lot of condensation build up in the tent, I had no idea my Bloody Mary was literally soaked, all around my mid section, from the condensation dripping off the internal tent poles.  The fabric appeared to have beaded up much of the water, some of it looked like it had soaked “through” but it did not effect the performance of the bag at all.  When the sun came out and there was a slight breeze, the outer shell material stood up to me throwing it out on the shale and rocky ground to dry for a while.  Within about 30 minutes, there was no evidence of moisture, so the shell dries fast too.  Sometimes, in the sheep mountains of BC you will be wet for days, and get only short little breaks of sunshine, that really heat up the surrounding terrain, it’s during these times a sheep hunter dries his gear so it’s fairly important the gear you have, dries quick!

The water repellency of the shell was tested several nights in a row, when we were camped down low beside a slow moving river, that humidity in the tent became a problem, (we had a siltarp overtop which prevented the tent from breathing) every morning, the Bloody Mary was drenched from the condensation dripping off the tent poles, we went through a routine of drying out the bag everyday with the sunshine (and it was hot during the day) and the bag still continued doing what it was supposed to do, keep me warm.

The coldest it got was likely around 0c as all of the dew on our tent was frozen in the morning, and a slight icy crust on my water bottle, indicated it was a cooler August night, I was still warm and cozy in the bag.

The warmest it got, was hot, I actually slept in the bag with the entire zipper open, for ventilation that night.  For this trip I had the 1/2 collar in place, and left the other collar behind, to reduce weight.

What Are My Final Thoughts?

Once  I got to using the Bloody Mary in the field, I was quite happy with the way the bag performed.  It’s what it is advertised as, a very lightweight, and warm 3 season down sleeping bag.

What Are The Pros?

What Are The Cons?

If you’re looking for a lightweight sleeping bag that will keep you warm and comfortable through the 3 seasons in the BC mountains then the Valandre, Bloody Mary is a sleeping bag worth looking into.  It’s expensive, but performs really well in the field, compresses down small and weighs less than two pounds.  What else do you want from your 3 season sleeping bag?