The Blacktail season opened for rifle hunters on the 10th of September, but busy with work, I had very little time to hunt or do much scouting in the early season.  Having been unsuccessful for Moose this year, the freezer was getting a little lean as well, so when the October rains began to fall, I kicked it into high gear to try and put a buck or two on the ground. 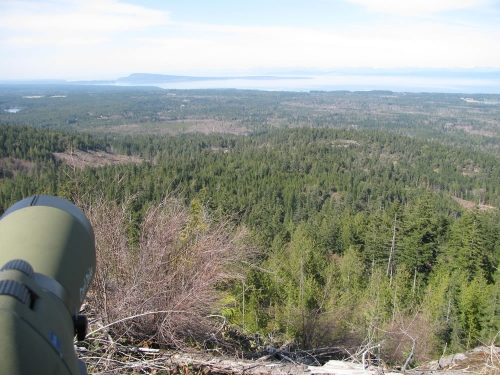 The area I hunt is no more than a 2 minute quad ride from my front door and it’s several thousand acres of slashes of varying age and growth along with quite a bit of 2nd growth timber.  The bush is thick, thick, thick which makes it really hard to go hiking and expect to see deer before they hear me.  There is a fair bit of rocky bluffs mixed in throughout the slashes and if you can travel along these rocky spines the going is a little easier and a lot quieter. 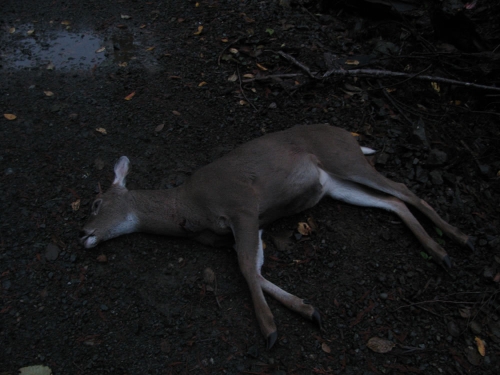 After spending a few mornings and evenings out without seeing a thing, I went out one mildly stormy morning a few weeks ago and came across a young spike, literally in the middle of the road.  One shot with my Tikka .270 and he was face down in the dirt… 1 buck for the freezer and now I could start getting serious about hunting for a big buck.

It’s a popular area that I am hunting and it’s been getting quite a bit of hunting pressure, so if I was going to have a chance at a decent blacktail, I was going to have to work a little harder and smarter than the rest.  It wasn’t until the first week of November when the action started getting a little hotter and I was starting to see deer everyday.

On the logging roads, and sitting in my ambush spots by 6:00am was the key, as I was beating everyone into the area, and getting first crack at hopefully seeing something.  There was a whack of sign on two of the lower roads in the area and there is literally fresh deer tracks every night, all over the road, fresh rubs and by the sign there was there has definitely been some good bucks running around.

On Wednesday morning, about 6:00 I pulled up to the slash, I was going to hunt in the dark still, and shut off the bike.  Slowly the sounds of early morning in the forest start to take over again and all was pretty still and quite.  5 minutes had gone by when I heard some twigs snapping up the road ahead of me… I waited patiently, and all of a sudden two deer jumped out onto the road about 150 yards ahead of me… My instincts had me immediately watching the trailing deer with my Binos and he was definitely a buck, not huge but a decent 2 or 3 point (too dark too tell) and the deer in front was another 2 point as well.  The deer were on the road for about 15 seconds or so and then hopped into the slash.  I slowly snuck off my quad and into the slash behind an old stump to see if I could get a better view of these two bucks. 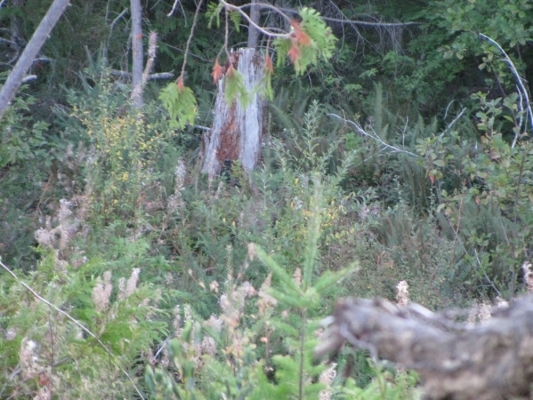 Trying to spot a tiny little blacktail deer, in a great big slash in low light conditions is a tough go!  They blend in superbly well, but sure enough a few snapping twigs keyed me into one of the bucks locations and he was headed right for me!  Both bucks ended up passing within 30 yards of me without so much as looking at me… They weren’t spooked but they had somewhere to be and were moving at a very steady walk…  After getting a really good a look at both bucks, I decided to pass and keep looking… That morning ended without anymore action.

Fast forward the next day, Thursday morning, same deal…. Out of bed and in the area I want to hunt by 6:00am.  I’ve beaten all the hunters again, and pretty much have first choice where I want to go.  I parked my quad a few yards back from the section of road where all the deer are crossing, and started slowly walking in.  It was near pitch dark as I slowly walked down the logging road where all of the deer action seemed to be happening  and with a controlled burst of my headlamp was able to confirm, that once again the road was littered with fresh tracks.

As I slowly and quietly rounded the first corner to where I had a little bit of visibility, I heard a crash in the brush up ahead… Throwing up the glasses I had a deer in the frames right away.  It looked like a buck, but still too dark to make out what his head gear was let alone try and shoot, so I patiently waited for a bit more light….

The buck wasn’t in a hurry and slowly crept out of the ditch, and onto the road where I could get a better look… Confirming he was definitely a buck, but still no idea on size/points in the low light.  He slowly meandered down the edge of the road from me, and I tried to keep up with him as quietly as I could.  But he had rounded the corner and out of my sight…  I had been following these deer for a while, and knew where he was likely going to cross out of the timber again to get to his bedding area….

It took a minute or two, but I finally arrived to where the buck was standing when I first saw him and could see by the looks of his tracks he was a pretty big bodied deer.   A few more minutes down the road and I was just about to where they cross again and into the timber, when I see a Doe up ahead just jumping into the thick stuff, so up the go glasses and there he is!  The buck is in the middle of the road, really big bodied deer but not much for headgear and in the early light he looked like a big 2 or a really small 3 point…  After watching him for a minute or two, once again I decided there had to be a better buck around and reluctantly let the deer go.   The rest of the morning was once again, uneventful.

6:00 Friday morning rolled around pretty quickly and I found myself back on the logging road under the guiding light of my headlamp slowly working my way into the same spot where I’d been seeing all the deer the last few days.  Parking the quad and starting to walk in the dark, I wanted to get back as far down the road as I could, so at first light I’d be in their crossing zone for an ambush.  After about 45 minutes I’d covered the entire section of road, and now the morning light was upon me.  Contemplating, turning around and going back to the quad, or walking another mile or so of road and looping through the slash to my quad… Seeing there was nobody else out, and I hadn’t heard anyone else running about I decided to finish my walk, maybe, just maybe I’d luck out on a buck.

As luck would have it… About another 1/2 mile into my hike I was coming into another area where slash meets heavy timber, and low and behold caught movement up the road, and slightly downhill from my position.  Throwing up the glasses, I confirmed it was a good buck right away, well at least better than anything I’d seen yet. Only about 150 yards away,  he had his nose right up this does butt and was really trying hard to get her back into the timber…

I had about 5 seconds to study the buck and then made the decision I’d be a fool to pass up this gimme so I jacked a shell into my gun, up went the crosshairs onto his chest and just before he decided to jump the ditch in pursuit of the doe I squeezed my finger and the .270 let out a bark.  Pretty sure I hit him, I briskly walked down the road expecting to see him lying there, as I got a little closer I could see he wasn’t there… SHIT, I thought, maybe I hit him too far back…?  Sure enough as I got closer, he was there in the ditch trying to get his feet back under him for an escape, so quickly, I jacked another shell into the chamber and finished him off with a clean shot to the vitals. 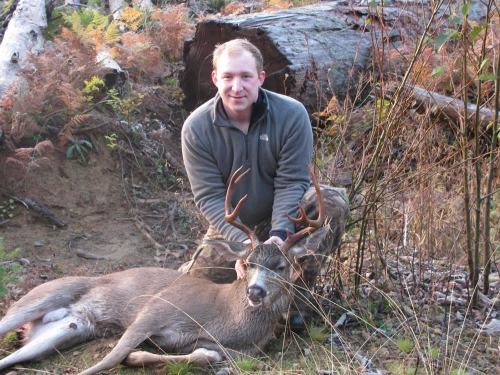 I let out a few hoorays, cut my tag and then dragged the buck into the timber to hide him a little bit, while I ventured off up the slash to get my quad to come and load him.  While he’s definitely not the “big” buck I know is running around here, he’s my best blacktail to date and I am pretty thrilled with this buck.