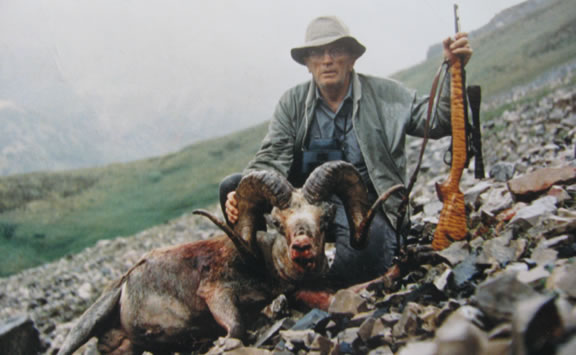 There has been a long time debate on the aging of rams in the field by counting the annuli on their horns.  This won’t be a tutorial on “aging” a thinhorn to the specific year (we’ll touch on it) but more on how to judge an Old Ram vs. a Young Ram.

It’s been studied and documented that harvesting the older mature rams is the least harmful harvest on the population dynamics of any given herd of Stone’s Sheep. Sheep are a species that suffer very low mortality rates among healthy animals in their prime of life (5,6,7 even 8 ) year old rams because of the way they live.  They look out for each other!  These mid-mature rams are the most likely to survive the harsh winter directly following after the rut.

The older 8,9,10+ rams are the least likely to survive, so in order to harvest the individuals that will least impact the herd we should be targeting these older more mature rams because “technically” they are going to die within the next year or two anyways.  If a ram is 10+ it’s a good chance he’s on his last legs and likely may not even be breeding anymore, instead sitting back and watching the drama of the rut unfold conserving their energy for the long winter ahead and taking the limited feed from the young up and comers.

Now that aside let’s start talking about a Thinhorn Rams horn…  Thinhorn lambs are usually born in June (we’re talking stone’s sheep here)…  If it’s born a ram this means he’s really only got 3-4 months from birth (june,july,august,september) for his horns to grow until winter and then they will cease to grow throughout the cold, harsh winter months when food is scarce and energy goes into creating body heat.

In the spring as early as April (weather and feed permitting) the growth begins again and this starting and stopping of growth every year  is how the “annuli” or “growth rings” are formed on a ram.

During the 2nd, 3rd, and 4th years of a rams life his horns will grow quite rapidly and you can see evidence of this rapid growth in the wide distances between his annuli.  As a ram ages beyond 5,6 & 7 his rate of growth (in length) will become less and less as the years progress and his horns will gain circumference and mass instead. As illustrated below. 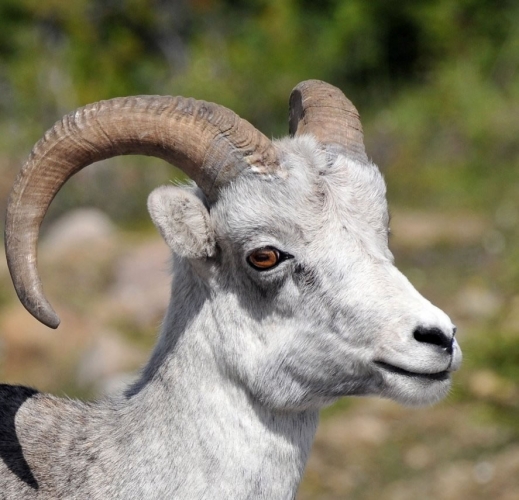 This young ram appears to be roughly 3.5 years of age.  He’s got quite a ways to go yet. 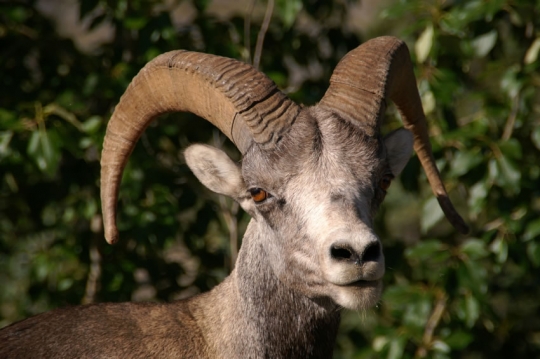 This young ram appears to be roughly 4.5 years of age, Notice that this rams bases are starting to get noticably bigger.

These first four years are when the ram will grow the fastest which is evident in the spacing of his annuli.  From this point on the ram the ram will be putting less energy into horn length and more energy into the weight and circumference of his bases in preparation for the many battles he will encounter in the next few years during the rut.

After the rams 4th year the distance between his annuli is going to start getting progressively shorter and shorter as that new horn growth is no longer put only into the length of the rams horn, but also into building up mass in his bases so when the rut comes and he’s old enough to participate (5,6,7+) he will be ready to take some substantial blows to the head during the many fights he may encounter when trying to breed. 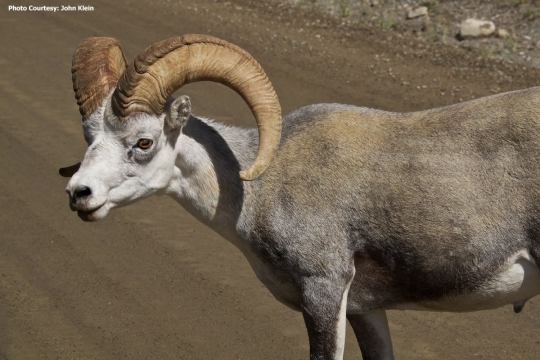 The bases are much larger and he’s starting to curl but at such a young age he’s still got quite a ways to go for “legal” status.  This ram would now be considered “breeding age” and although he’s not the biggest ram, he’ll sneak in anywhere he can for some ewe.  Take notice of how the spacing between his annuli is gradually getting smaller? 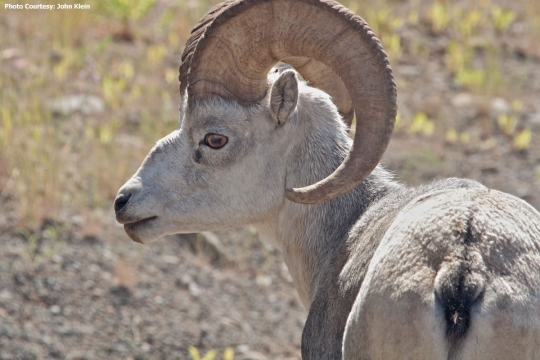 You can clearly see the wide spacing of annuli close to his bases.  A clue he’s a young ram.  Just like the ram above, even though he’s sexually mature and now fighting for dominance within the band he’s still got a few years left until he becomes a truly great ram. 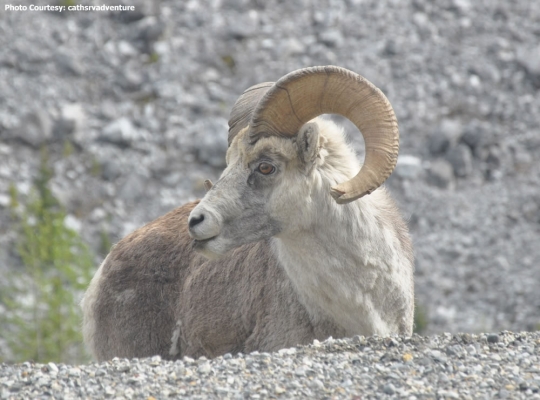 This young ram appears to be 7.5 years of age.

He might almost make full curl on his other side, but with the brooming and the fact he is visibly still a young ram, this is a ram better left on the mountain.  In two or three more years he’ll be a great ram. 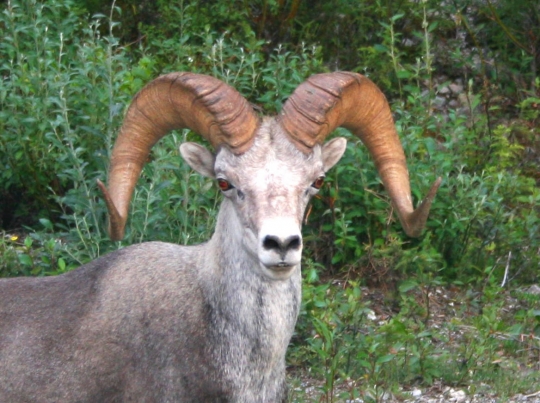 This mature ram appears to be roughly 8.5 years old.

His curl is very close to full curl but you’d really need to view this ram squarely from the side to make that call.  Based on what is visible for Annuli he would be a legal ram by age. But that is a decision that would be left to you.  Are there bigger rams?  Yep, certainly… Is he a respectable 8 year old ram?  Yep, certainly! 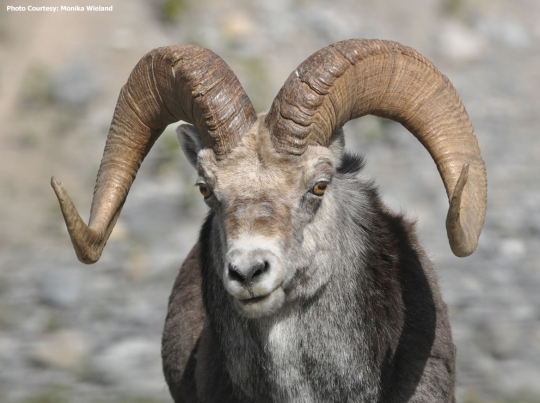 This mature ram appears to be at least 8.5

Once You Understand Growth Patterns This Becomes Much Easier…

What Is A Growth Pattern?

The growth pattern on a ram is the gradual increase and decrease of growth over his lifespan as evidenced by the spacing between the annuli on his horns.  By knowing and understanding what a growth pattern is and how to look for it, you can better hone in on the calibre of ram you’re looking at when trying to make the decision on mature vs young. 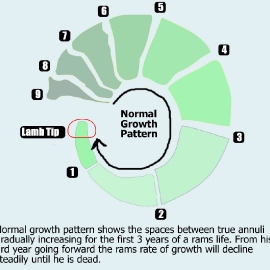 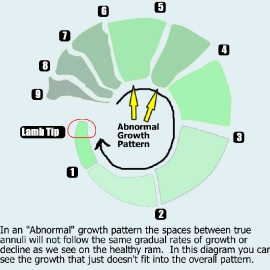 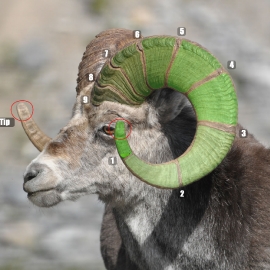 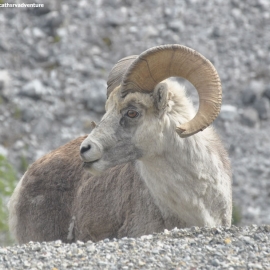 The difference between a 40″ and a 36″ ram is only 4 inches in length.  If you averaged that growth out over a period of lets say 8 years (a mature ram) that only equates to about 1/2″ an inch difference in growth each year.  So the annuli on a 36″ or a 40″ ram (from the same general area) aren’t going to fall in radically different spots, there will be a consistency.  By knowing what a growth pattern is, and how to spot one you can hone in on where the annuli SHOULD be and you’ll be in a better position to discount the false annuli that will surely be present.

Just to go over it one more time… The growth pattern on a ram is the gradual increase and decrease of horn growth over his lifespan as evidenced by the spacing between the annuli on his horns.

Old Ram Vs. Young Ram  – How Can You Tell Without Aging? There are several clues to help identify a mature ram.  You don’t always have to count the annuli, studying the horns themselves can teach you a lot too.

Aging rams in the field can be difficult if you don’t know what to look for.  Every year this leads to the seizure of illegal and underaged rams across all species (thinhorn and bighorn) throughout BC.  A practice that isn’t good for our sheep or future sheep hunting opportunities.

While many hunters trudge out into the mountains every year somewhat clueless as to what to look for aside from the full curl diagram in the game regulations, the ability to identify a mature legal ram, from an immature legal ram is a good skill to have. Without aging to the specific year there are many different methods talked about by guides and other sheep hunters as to how to quickly judging trophy quality of a ram, but for this article we’re going to stick with one of the simplest methods and probably the easiest for any new sheep hunter to quickly identify mature Stone’s rams out of a band of several.

#1.  Old rams usually have horns that will look pretty rough and weathered especially the bases.  They may even have chunks missing and look very roughed up.

#2.  Old rams will carry their weight from the base of their horns right to the tips (or broomed off section), the horns will look heavy and consistent as opposed to a younger ram who will have horns that appear to be quite thin, especially when viewed from a distance.

#3.  Old rams will have stacked Annuli at the bases of their horns, meaning it will be such a mess of compacted “rings” you won’t really be able to decipher what is or what isn’t without the ram being on the ground.

Knowing more about these animals, and how to identify them will help you be more confident when you decide to pull the trigger on a ram.

Mature Stone’s Ram
Immature Stone’s Ram
The ram on the left has very rough looking horns, there are chunks taken out, the visible annuli are quite close together and the annuli right near the base are very tightly packed and hard to decipher.  These are all signs of a mature Stone’s ram.
The ram on the right has smooth looking horns, the annuli are easy to see and are not compacted near the base.  With annuli spacing that wide apart that close to the base these are characteristics of an immature Stones’ ram.

With the horns marked it becomes much easier to see the differences.  Sheep won’t have these fancy markings in the field so this is why understanding their growth patterns is a very important part of field judging the maturity of a ram.

[box color=”brown-vibrant” type=”square” icon=”exclamation”]If you come across a ram that is broomed or broken on one or both sides, studying the bases will help you get a rough idea on maturity.  The differences are there if you’re looking for them.[/box] [divider type=”plain” width=”medium” align=”aligncenter” clear=”clearleft”] 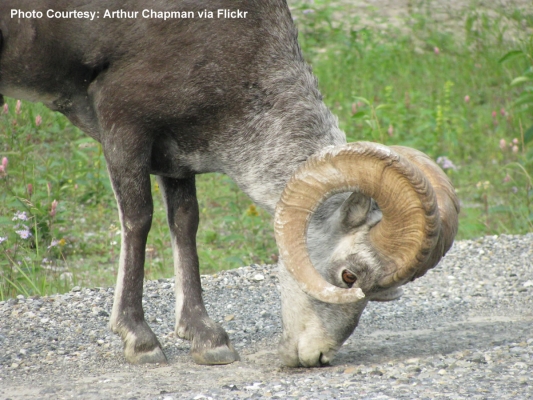 A quick glance let’s you know this is a full curl ram.  Based on what you now know about his horns do you think he’s a good mature ram or an immature ram, that’s legal by curl 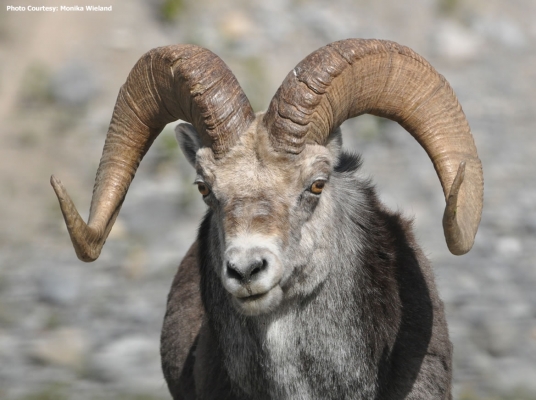 Based on this frontal view it’s pretty easy to tell this is a legal full curl ram.  Based on what you now know about Stone’s sheep horns do you think this is a good example of a mature Stone’s sheep ram? 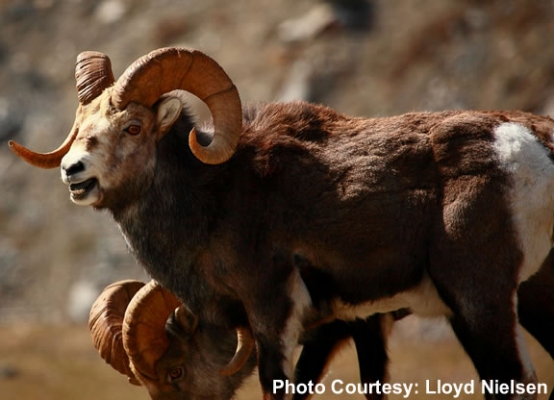 This ram is very close to being legal by curl.  Based on what you now know about Stone’s sheep horns do you think this is a good example of a mature Stone’s sheep ram?

In Closing Stone’s Sheep are truly one of the most challenging animals to hunt in BC.  They live in rough country, they can be extremely hard to find, and they can be even harder to indentify when you are lucky enough to get within spotting/shooting range.  It can take many days on the mountain to find a great ram and hopefully with the help of articles like this one the task of indentifying the right ram for you will be made a little easier. Thanks To The Following Individuals For Their Assistance With This Article. Without the help and cooperation of the following individuals this educational piece would not have been possible.  So a big round of thanks for them.

If you have any questions about Stone Sheep or any comments you’d like to add to this article please free to post them in the comments section below.