Once again, this year we headed off into Northeastern BC for a Stone Sheep hunt, followed up with a few days of hunting for a bull moose in the “any bull” season which is from August 15th to 31st.  It was a long journey this time, but we were able to put ourselves more than 15 miles into sheep country off the Alaska Highway.

We did find a dandy ram our first evening hunting, too late to make a stalk we studied him closely, and determined he was approx 38″ and broomed, even with his brooming he was still above full curl and had some fairly heavy bases.  The ram looked to be at least 9 years old, but we still needed to get in for a closer look, we were excited about putting a stalk on him the following morning.  We’ve seen legal rams before, but finally we were onto a ram of the calibre we were really after.

The ram was all alone, eating on a grassy patch in the black shale, we were hoping he would pick up with some buddies through the night and there might a small band there by morning… No such luck.  We awoke early morning and were out of the tent and headed in his direction by 5:30am.  He was still there, eating grass, just as he was the night before… Sheep are pretty predicable when not spooked.

As it sometimes goes in sheep country, the stalk was blown in the last few hundred meters as we were closing the distance, down a small shale shute.  The ram spotted us, and slowly went and bedded down on a little rocky knoll where he could pretty much see anything and everything in the valley… We tried another option, (our only option) with hopes we could salvage the attempt, our hopes were dashed as the outfitters supercub came and repeatedly buzzed the valley we were in, and adjacent valleys as well.  We watched that ram run over the mountain, pretty sure the pilot did too.

We continued sheep hunting for about 6 days, finding many sheep and goats, 1 more legal ram, but he was young and we left him there for another year.  It was a very long, long haul out when we broke camp and decided to shift our remaining few days time to hunt Moose and hopefully have something to fill the freezer.

We had a decent chance at a 40″ or so bull moose opening morning,  he was onto us immediately and when we had the opportunity to shoot, it just wasn’t right… We let the bull walk without firing a single shot.  We spent another 4 days hunting Moose in the valleys and swamps around the area to no avail… We found plenty of cow moose, and plenty of other hunters but this year, was just one of those years where we got nothing!

I’ll leave the story at that, enjoy the pictures below. 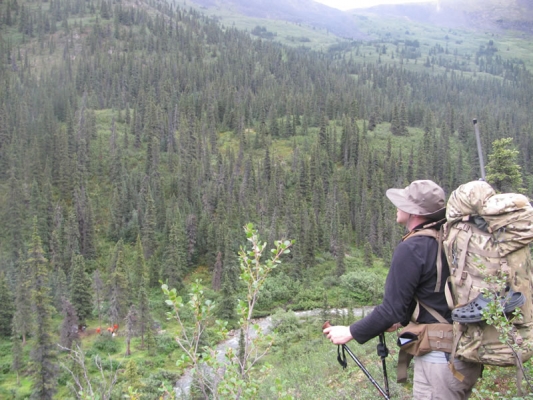 We’ve finally made it too the valley we wanted and now we are beginning the first chunk of our climb…  The Mystery Ranch NICE 6500 weighs about 58lbs in this photo, rifle and a weeks worth of food/supply. 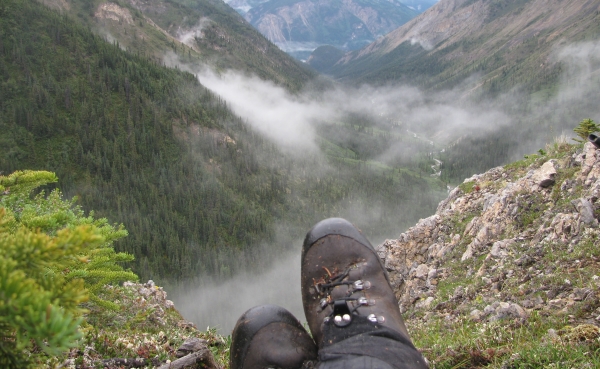 Looking back at where we’ve come from, many miles from the nearest road.  My Hanwag trapper tops from Lathrop and Sons have made a lot of mountain miles over the years! 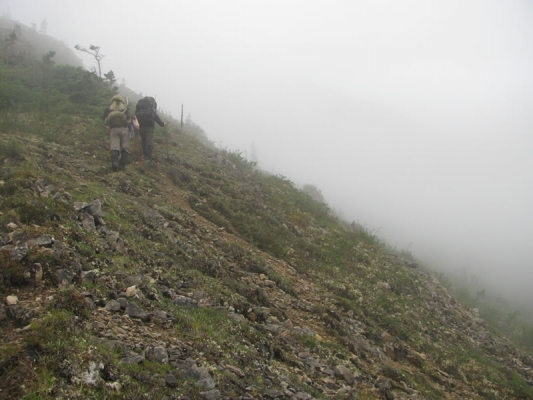 We hadn’t even made 1000′ of altitude when the fog started rolling in really thick.  It’s a cool experience being enveloped by fog as you climb through the steep and rocky terrain. 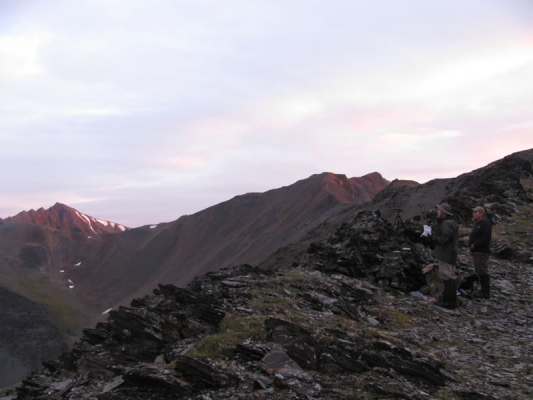 We pitched our camp just below 6800′ in elevation, in a very small and rocky valley, that gave us a “little” break from the wind, and some excellent vantage points to stay fairly well hidden and glass the surrounding mountains. 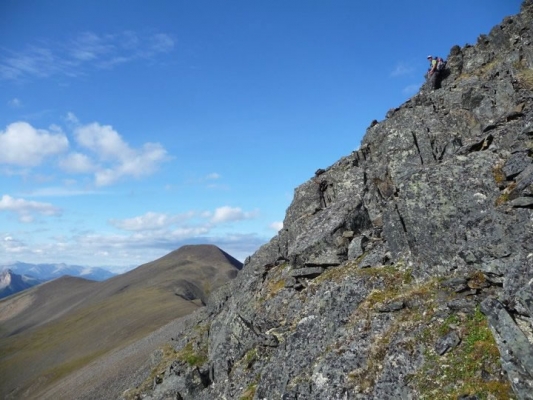 Getting around the ridges without walking on skyline can sometimes make for some pretty steep and rugged hiking/crawling. 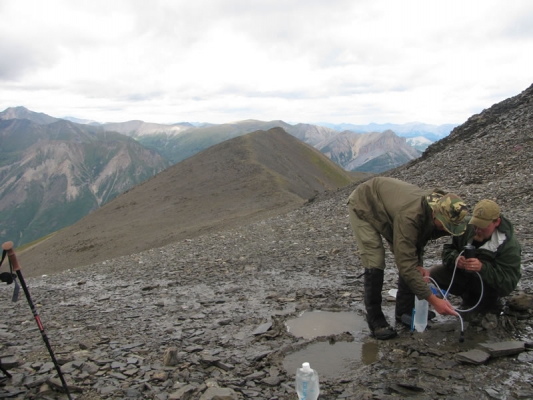 Our water source was a good 45 minutes from where we camped, and was just some snowpack on the ridge.  Using large pieces of shale we dug some holes at the bottom of the snow and let them fill up with the murky/muddy water from the melting snow.  It would clear up after a few minutes and then we’d pump it out with the Katadyn Vario water filter, which works great for our backpack hunts. 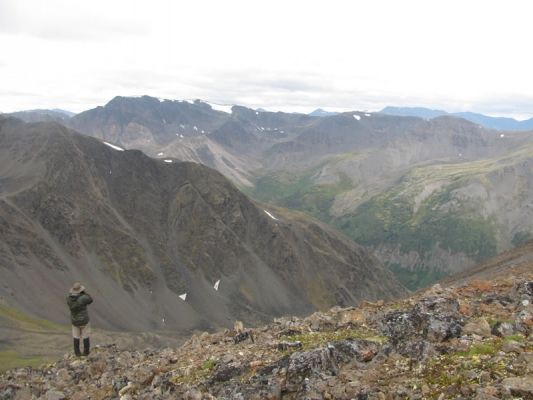 Like most sheep hunts, we spend a pile of time behind our optics and we spotted a pile of sheep, goats, moose and caribou.  Here we are looking out over some country where my family has taken plenty of good Stone Rams. 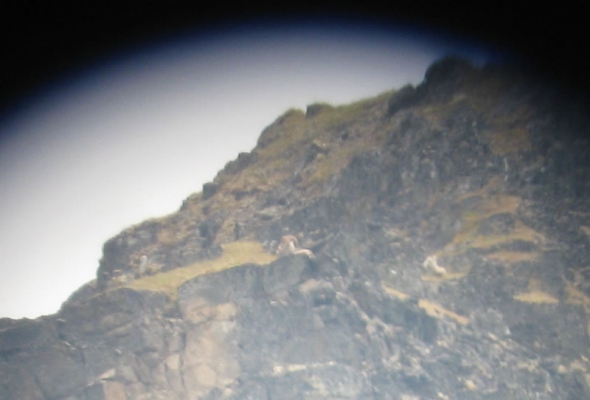 A small but legal full curl ram perched up on a high ledge, there is another young ram to his right.  He gave us a few good looks when he would stand up, and he appeared to be only 7 years old, we didn’t even go in for a closer look, as he didn’t carry much weight, and looked like he just barely made full curl.   Maybe next year. 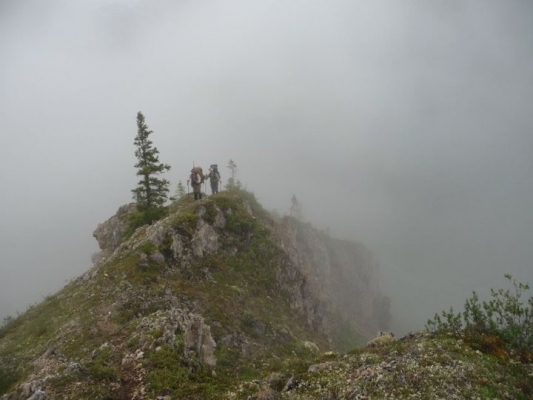 Another foggy day in the sheep mountains of BC.  Foggy days are always a good day to move camps, or skirt across patches of mountain unseen by the game around you.  Sheep have excellent eyesight and spot movement very quickly, even at 1000 yards or more.

Here we are on the hike out… We are several miles into it here, in thick timber, with heavy bugs and it was scorching hot out as well.  It was a very long, long day. 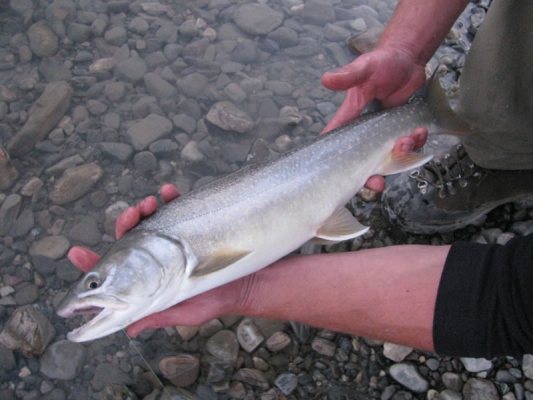 A nice bull trout one of us caught while hunting for Moose near the river.  We caught quite a few bull trout and grayling.

And that’s all folks!