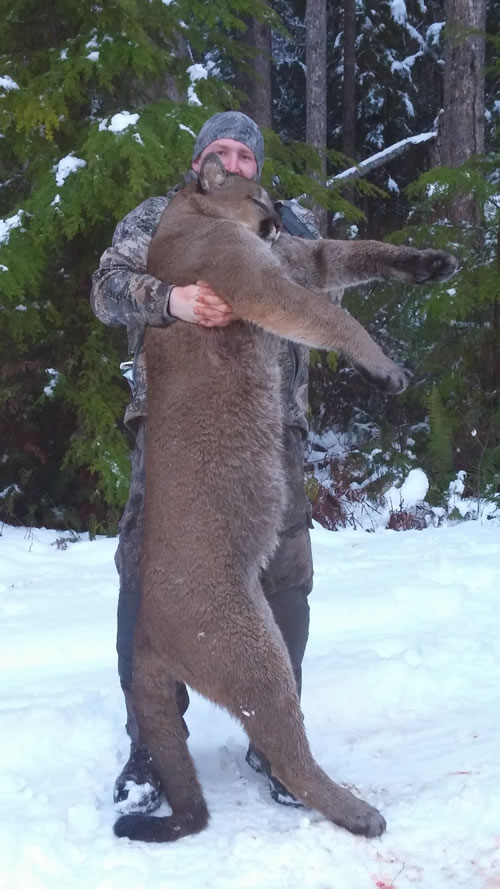 A nice big tom has been on my bucket list for a while and I’ve been friends with a local houndsman for quite a few years now and we’ve hunted together for sheep and gone out in search of cats a few times unsuccessfully. That all changed this past weekend!

With the nice fresh snow we were getting we made some plans and ventured out in the early morning. As we were getting into our area we noticed another houndsman heading up a spur, noted it mentally and moved on… We drove around in the snow for a few hours till we finally cut a fresh track, bad news though, it didn’t appear to be a mature tom like we were after and it also looked like some other hunters were already on the track, first come first serve so we moved on and keep looking for another cat to pursue elsewhere.

We drove around logging spurs for several more hours finding a couple sets of old, snowed in tracks, some elk tracks and a few odd deer tracks and as the day wore on it was beginning to feel like another scenic drive, lol!

We finished driving the road networks we were on and and it was getting into the late afternoon when we then proceeded to head home but before we did, we thought we’d just check out that spur we saw the other houndsman on first thing in the morning, just in case… You know how it is!!

The other hunter was long gone and there were clearly a few trucks that had already driven the road throughout the day… How they all missed the fresh set of Tom tracks crossing the road we’ll never know! Maybe they missed them, maybe the tracks weren’t there yet, maybe they didn’t care, we don’t really know but we were after cats and here was a good track.

We knew the track was fresh that day and judging by the size he was exactly what we were after. We walked it out a little ways down into the timber just to make double sure there wasn’t another hunter or dogs trailing it and we were good. Back to the truck we go, and out go two dogs.

If you’ve never witnessed how these dogs work, holy cow! These brave little dogs are trained so well they just don’t know anything else. They picked up the cat track immediately and were gone like little barking rockets down into the timber.

They were going down into a swampy creek bottom and had to work out the track amidst all the standing water and wet snow falling out of the trees. They kept at it though, looping around and getting further down the bottom, it wasn’t long until their bark had changed and their movement had stopped. They had something treed! We had repositioned ourselves along another road while the dogs were running so we could be a little closer to the action, and out go the other two dogs. They were both extremely upset they didn’t get to run it from the get-go and down over the bank they go! It took several minutes for them to reach the other dogs and the valley was now lit up with a symphony of barking hounds.

We made it through all the deadfall and down into the swamp and finally got to the tree and I could see all four dogs looking up in a big cedar and going absolutely wild! “There he is” my buddy said, and I could see the cats hind leg and a big tail about 30 feet up the tree, just then he peeked around the tree at us and we could see his big noggin and he was clearly not amused with our operation.

We gathered up the dogs, took a few photos and got a good look at the cat before making a final decision. Then we walked around the tree trying to get into a good position to make a clean shot through the chorus of barking. “Whenever you’re ready” he said… I let him know it was a go and “BOOM” The cat just folded up and came crashing to the ground, we were both ready for a followup but it was over, he was done, bullet went in the breadbasket at an upward angle and got itself lodged in his spine.

We let the dogs have their moment of victory, had a celebratory handshake and then we hauled him back out through all the deadfall and made it back to the truck just before it started getting dark.

It wasn’t the all day marathon chase some guys have to go through for a cat but that is just the way it goes down sometimes when you show up at the right place at the right time. It’s been a tough year for me this year, so at least we’re ending 2016 on a high note and crossing something off the bucket list.

I’ve been hunting a long time (20+ years) with what I would consider some really good, knowleageable hunters and it’s always a pleasure to connect with and hunt with another person who is absolutely passionate about what they do, my buddy is one of those guys, cool, calm, collected, done this a 100+ times before… He eats, sleeps and breathes cat hunting and (so do his dogs!) and it shows. Thanks a million for an awesome time.